The region’s core has the highest concentration of people, jobs, and infrastructure, much of which are at significant risk from storm-surge flooding. Superstorm Sandy brought the core to a halt and left behind tens of billions of dollars in damage to infrastructure, homes, businesses, and other property. Investments in resiliency projects after Sandy were made at the local level to protect those communities, but many others will still be vulnerable.

With this in mind, it is necessary to determine whether an investment in a regional surge barrier system will be needed over time and what impacts it could have. The most frequently considered barrier design would entail constructing a five-mile long “Outer Harbor Gateway” across the New York Bight from Sandy Hook to the Rockaway Peninsula, in addition to a barrier at the East River.

Such a project would introduce an engineered system to a complex network of more than 30 rivers and streams. These include the Hudson, Passaic, Hackensack, and Raritan rivers; over a dozen tidal straits, such as the East River and Long Island Sound; and nearly forty bays, inlets, and coves, including Jamaica, Newark, and Raritan bays.

Constructing a surge barrier has the potential to protect critical infrastructure and hundreds of thousands of residents and businesses from the effects of storm-surge flooding. There are nevertheless many unknowns about the impacts of building a storm-surge barrier on the interconnected network of natural systems as well as key questions around social impacts, governance, funding, and decision-making that need to be answered.

Given the potential impact on the region’s residents, jobs, infrastructure, and property, the costs and benefits of a regional surge barrier need to be studied. In 2016, the U.S. Army Corps of Engineers (the Corps) began scoping for the New York/New Jersey Harbor & Tributaries Focus Area Feasibility Study, which will identify measures and alternatives to address coastal risk and determine potential future actions, which are likely to include a regional surge barrier. The study will result in a Chief Engineer’s Report to Congress, which could eventually lead to funding for the implementation of the measures recommended.

As part of this study, the Corps should break out the proposed surge barrier into a more comprehensive study that invites research across scientific disciplines. In particular, the Corps should provide the funding for hiring the region’s academic institutions and private and nonprofit experts to help determine the need, cost, and feasibility of a regional surge barrier, emphasizing the impacts on communities and our complex ecosystem. Experts in policy, governance, and land use should each determine the potential implications to their respective fields.

Particular emphasis should be placed on the following topic areas and considerations: 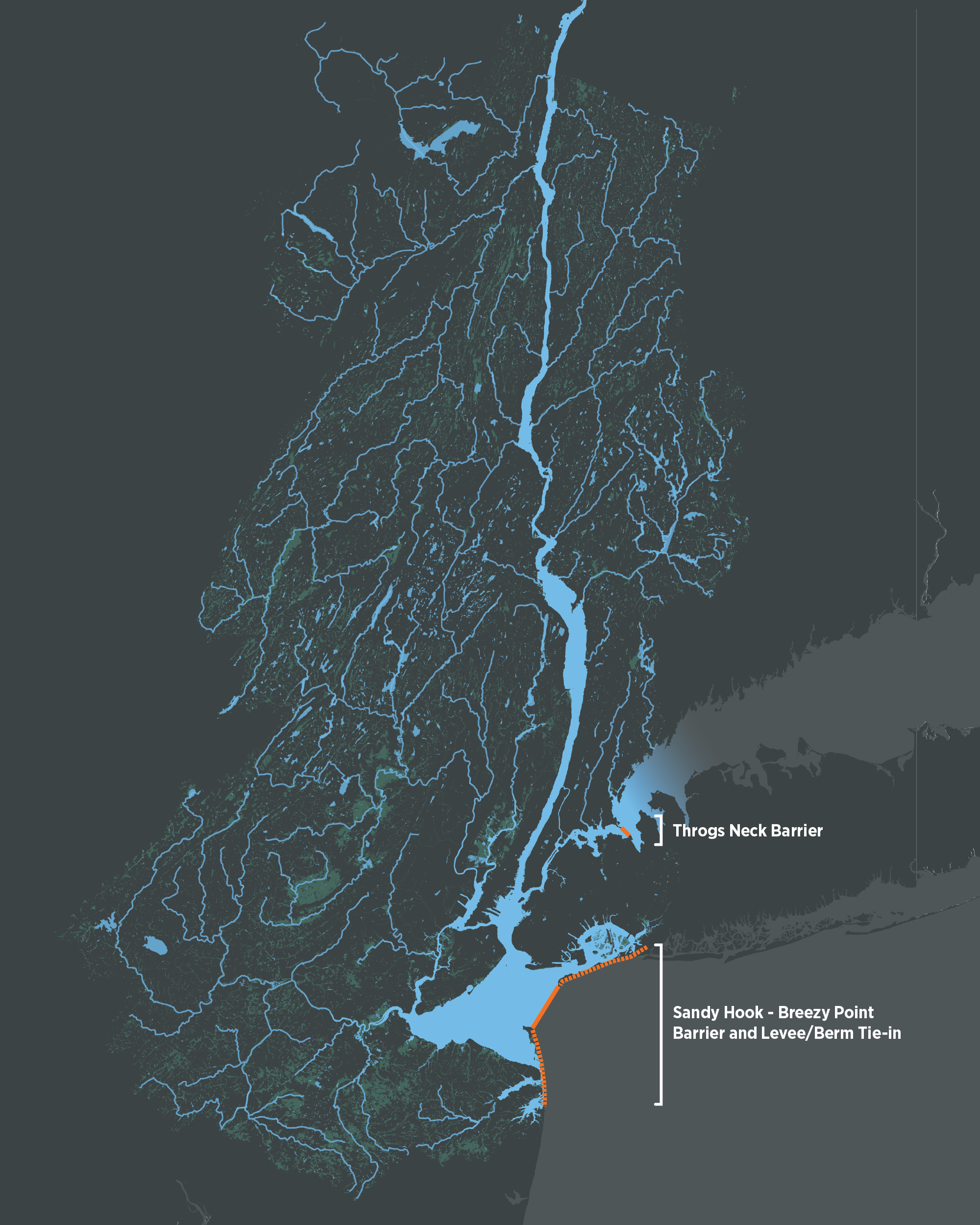 A storm surge barrier between Sandy Hook and Breezy Point would affect all the estuaries and watersheds upstream. The effects of that barrier need to be better understood before investing in such expensive infrastructure. Source: RPA

The proposed development of a surge barrier has led to heated, politically charged debates for a number of reasons detailed below.

A comprehensive study that evaluates all of the potential benefits and costs of a regional surge barrier system, weighed against other adaptation measures, would provide critical information to decision-makers and the region’s residents about whether and when a regional surge-barrier system should be constructed. Without answering the questions described above, arguments in favor or against such a system would be based largely on incomplete information, conjecture, and emotion.

Estimates for constructing a barrier range from $10 billion to $36 billion, with annual maintenance costs estimated between $100 million and $2.5 billion. Currently, the region’s planned adaptation projects are not yet fully funded, nor are upgrades to our transportation, water and wastewater, energy, and other critical pieces of infrastructure. Paying for a surge barrier will require new streams of funding that wouldn’t compromise local adaptation funding sources, and will sufficiently cover the necessary annual maintenance costs that ensure the system functions properly for decades to come.