Educational achievement is one of the most important determinants of personal well-being, and a key to the success of the region as a whole. It is a strong predictor of personal income, upward mobility, health, and longevity—and increasingly separates prosperous from declining metropolitan areas. Unfortunately, the large gap in achievement levels that stems from a long history of inequities for poor, black, and Hispanic families is a crisis for the region as well as the nation.

While educational outcomes are determined by many factors, including prenatal care and neighborhood conditions, the type and quality of schools can make the difference between success and failure. In the tri-state region, half of the elementary schools in predominantly low-income and non-white communities have low academic achievement when measured by fourth- and eighth-grade test scores, and only a small percentage are among the highest achieving. Test scores do not necessarily reflect the quality of instruction or leadership, but they are the best available indicator for comparing school outcomes across the region. And there is ample evidence that low-income and non-white students who attend high-achieving and integrated schools perform better than those who attend low-achieving, segregated schools, and that higher income and white students benefit as well.

By many measures, these small school systems are among the most racially and economically segregated in the United States. New York is the most segregated state in the nation when ranked by the exposure of black students to white students, and New Jersey and Connecticut rank sixth and 14th, respectively. By a broader measure, school segregation on Long Island is twice the national average.

Fragmentation also means many services cost taxpayers more than they should. Larger districts benefit from economies of scale, and therefore pay less per student for superintendents, teachers, administrative staff, transportation, and supplies than smaller districts, often without sacrificing the quality of the education. 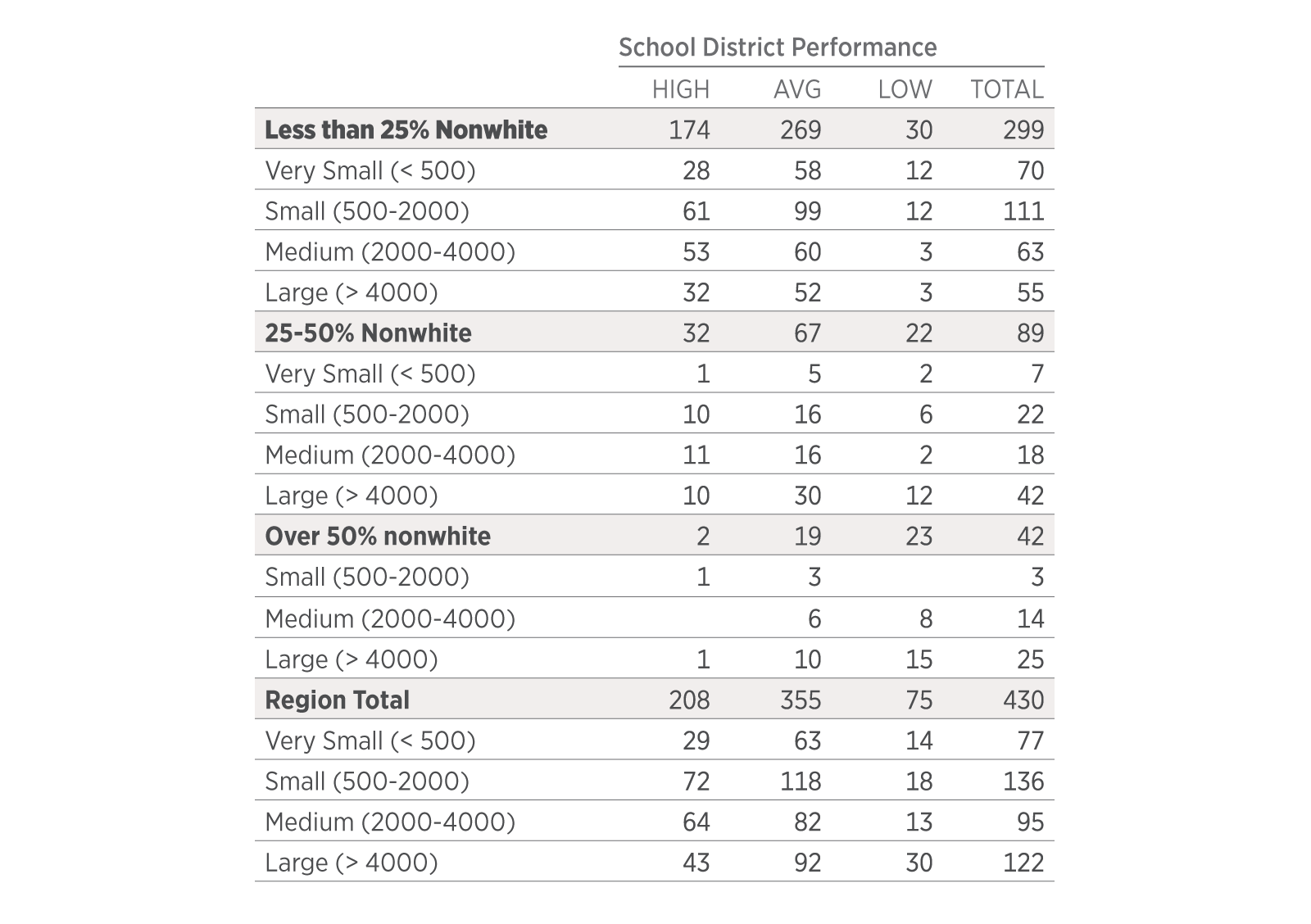 There is much that school districts can do, on their own or in collaboration with other districts, to reduce segregation and improve education outcomes. Where progress has been made, it has almost always been due to either federal or state action, usually in response to court orders. But the persistence of segregation after decades of court rulings requires states to be more assertive.

One way to proactively promote integration among school districts is through consolidation. States should provide incentives to collaborate and consolidate, working with school districts, counties, cities, towns, and villages to find the best regional solutions. And where incentives are not enough to achieve meaningful progress, the state should require actions among the following regionalization strategies:

Each state should set a goal of increasing the number students attending high-performing, integrated schools. A reasonable goal would be to bring school segregation to the national average in 15 years, and provide direction, support, and incentives for school districts to collaborate to meet that goal. The Hartford program and other models have proven that the gap between poor and affluent students and non-white and white students in reading scores, graduation scores, and other achievement measures can be reduced substantially and in a relatively short period of time.

The most expensive element of a regionalization strategy would be the creation of regional or magnet schools. They require substantial investments and programs that both provide support for low-achieving students and attract high-achieving students. Connecticut has spent $1.4 billion to build and renovate its magnet schools and $150 million to operate them each year. But this approach also has the advantage of being voluntary for families and students. School consolidation and other approaches also require upfront administrative costs, but should save money in the long term by achieving economies of scale and reducing costs per pupil.