Our region is rich in natural and recreational resources, including large tracts of protected and unprotected open spaces, parks, agricultural lands, waterways, and estuaries. But we often overlook these natural wonders, thinking of them as individual places disconnected from each other, instead of as a part of a regional ecosystem. This lack of connection diminishes our ability to access the wide variety of natural beauty, openness, and geographies that exist in the region today. It reduces awareness and experience of the natural environment and opportunities for environmental stewardship and open-space protection.

An accessible trail network could connect the region’s open spaces

I love Prospect Park, but I wish that it were easier to reach the parks and forests just outside New York City.

Connecting disparate open spaces can help us think of the region as an ecosystem—one that happens to have communities in it—and value our natural environment. A trail network weaving throughout every part of the region and beyond should be developed with existing and planned trails in combination with rights-of-way for pipelines, transmission lines, railways, roadways, and natural features such as beaches and waterways. When complete, the network would include user-friendly biking, hiking, and walking trails that connect the region’s treasured open spaces to each other and to our communities.

Fortunately, our region is already home to a number of clusters and arteries of trails of local, regional, and national importance, from the Appalachian Trail to the East Coast Greenway and smaller systems of hiking trails within parks. Even though many of these trails are not physically connected to each other, it would take just a few key investments to create a tri-state trail network of some 1,620 miles. This trail network would put almost nine million of the region’s residents within a half-mile of a trail—nearly 25 percent more than today.

There will be many challenges to implementing such a comprehensive trail network. On any stretch, there are likely to be conflicts and barriers, from competing uses and issues of liability to privacy concerns and local opposition to lack of funding for planning, construction, and maintenance of the system, among other issues. To overcome these challenges, we propose the following:

Organize a coalition to promote a regional trail network

The coalition would prioritize trail segments most relevant to regional connectivity, allocate funding, and provide support, data, and other resources to local governments and trail groups. Federal, state, and local government should collaborate with land trusts, trails groups, and other partnerships to develop this integrated network.

While some trails are natural and rugged, others should be designed to be accessible to a range of users, including those with limited mobility.

Create safe and user-friendly connections between trails and nearby transit

The complete network would run within a half-mile of 111 regional rail stations, plus 237 New York City subway stations and 13 PATH stations. Safe pathways and wayfinding signage between transit stations and trails would facilitate use, but would require policies and investments to enhance safety and operation.

When complete, the network would facilitate connections to nature, promote health, well-being, and economic activity, and foster stewardship of our natural resources. A regional network would put almost nine million people within a half-mile of a trail—trails that would connect to over 70,000 acres of protected and/or publicly owned open spaces. Access to green and open spaces is increasingly being linked to health benefits, including lower rates of obesity, greater activity levels, lower levels of depression, reduced allergies, and higher self-esteem, among others.

The network would also pass through 287 of the region’s municipalities, opening up economic-development opportunities around tourism, recreation, and hospitality. In New York, the Hudson River Valley Greenway alone generates an estimated $21 million annually in economic activity from visitors to the communities along the trail during its annual month-long Ramble event.

Finally, as climate change alters the habitat of our region’s wildlife, trails could provide an opportunity for habitat migration. To maximize the benefit of this opportunity, final planning and design for the trail system should factor in species migration and include habitat-friendly crossings, particularly along highways.

The Regional Trail Network would help establish the tri-state region’s reputation as a place where communities have direct and easy access to an interconnected network of natural and open spaces for everyone to enjoy. 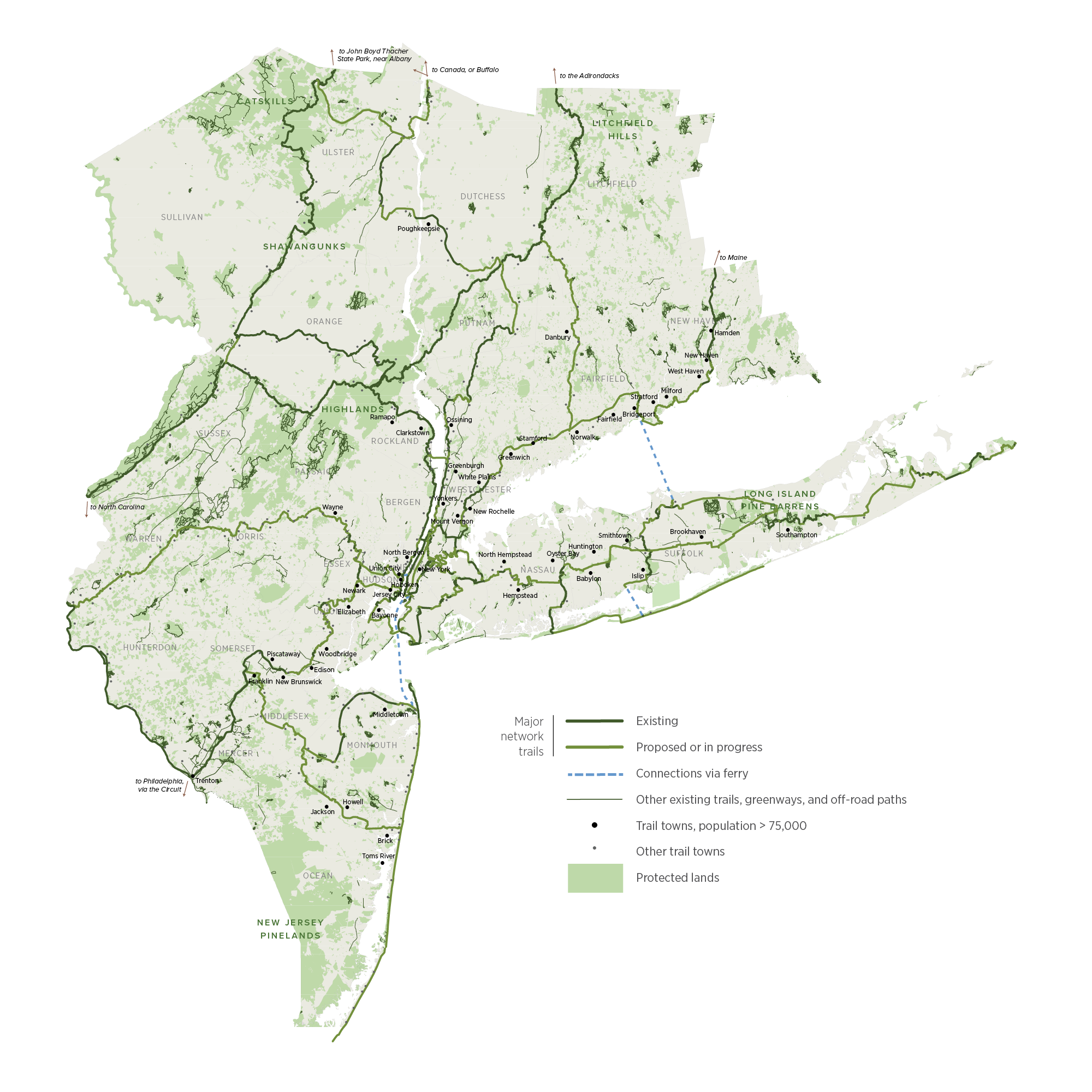 The Tri-State Trail network would link the region’s most beautiful parks and landscapes, from the Catskills and Pinelands to the beaches of Jersey and Long Island. More than 1,620 miles of biking, hiking, and walking trails would put more than 8 million residents within a half-mile of a trail, increasing access by 25 percent. More than 80 percent of the region’s residents would like within just two miles of a trail.Source: RPA

Building a regional trail network will require funding for planning, design, construction, and maintenance. One model is to combine philanthropic support with federal and state funding and partnerships at the local level, which was used in networks such as The Circuit around Philadelphia, PA, and could be replicated throughout the tri-state region. Increasingly, metropolitan planning organizations and state agencies recognize the importance of investing in multimodal transportation, including biking and walking. Ensuring line items in transportation budgets for trails will help advance those solutions.

Additionally, land trusts such as the Trust for Public Land and Scenic Hudson can play an important role in prioritizing open-space acquisition or securing easements for lands that contribute to the network. Finally, ensuring there are plans and adequate funding for maintenance and programming will be critical to the network’s success. An umbrella group that helps coordinate activities and supplement funding carried out by regional and local groups such as the New York-New Jersey Trail Conference and the D&R Greenway will help ensure the network thrives.