It’s 2040, and the former industrial city of Newburgh is an equitable, healthy, and sustainable city with thriving businesses and culture, and a majestic gateway to the Highlands and the Hudson Valley. 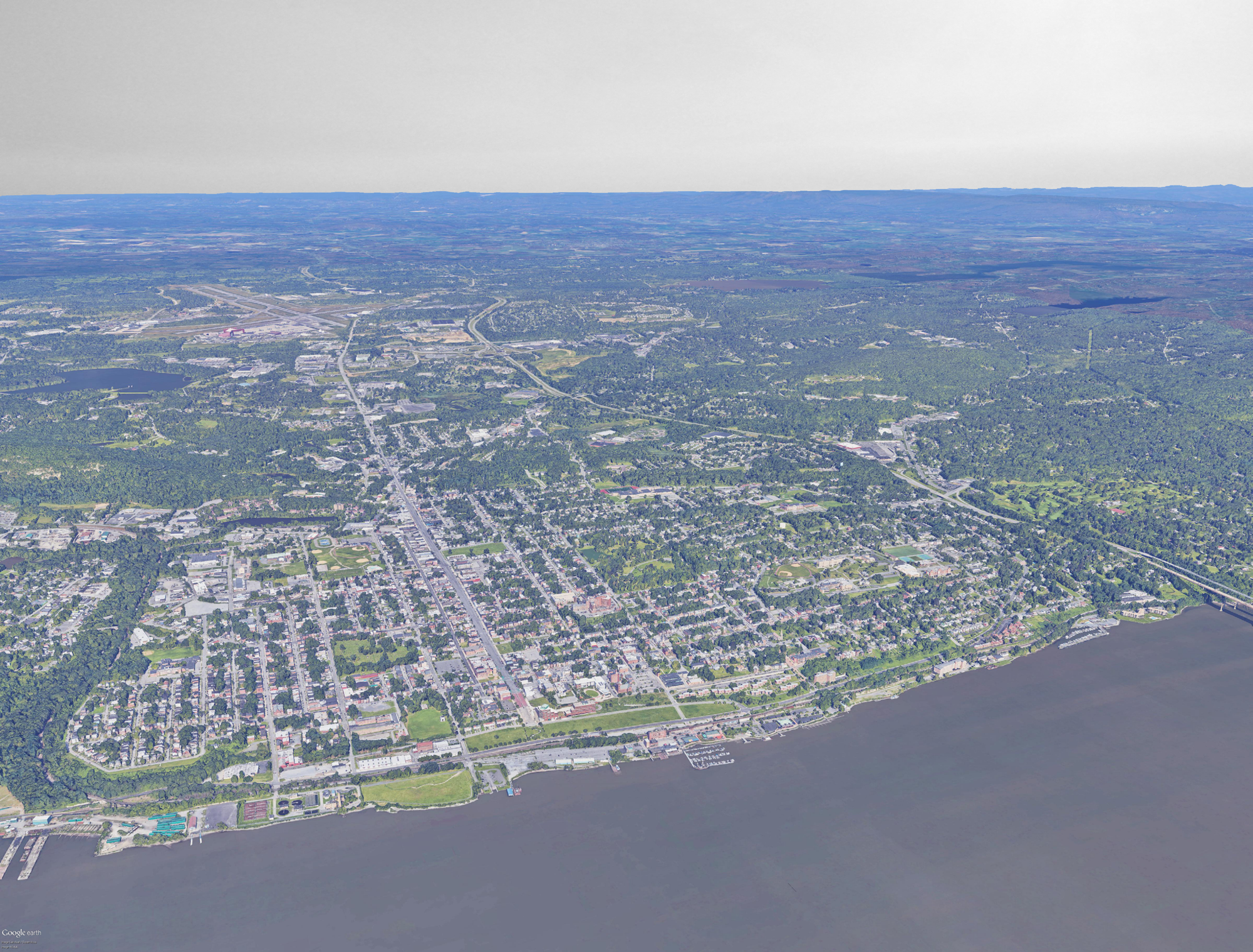 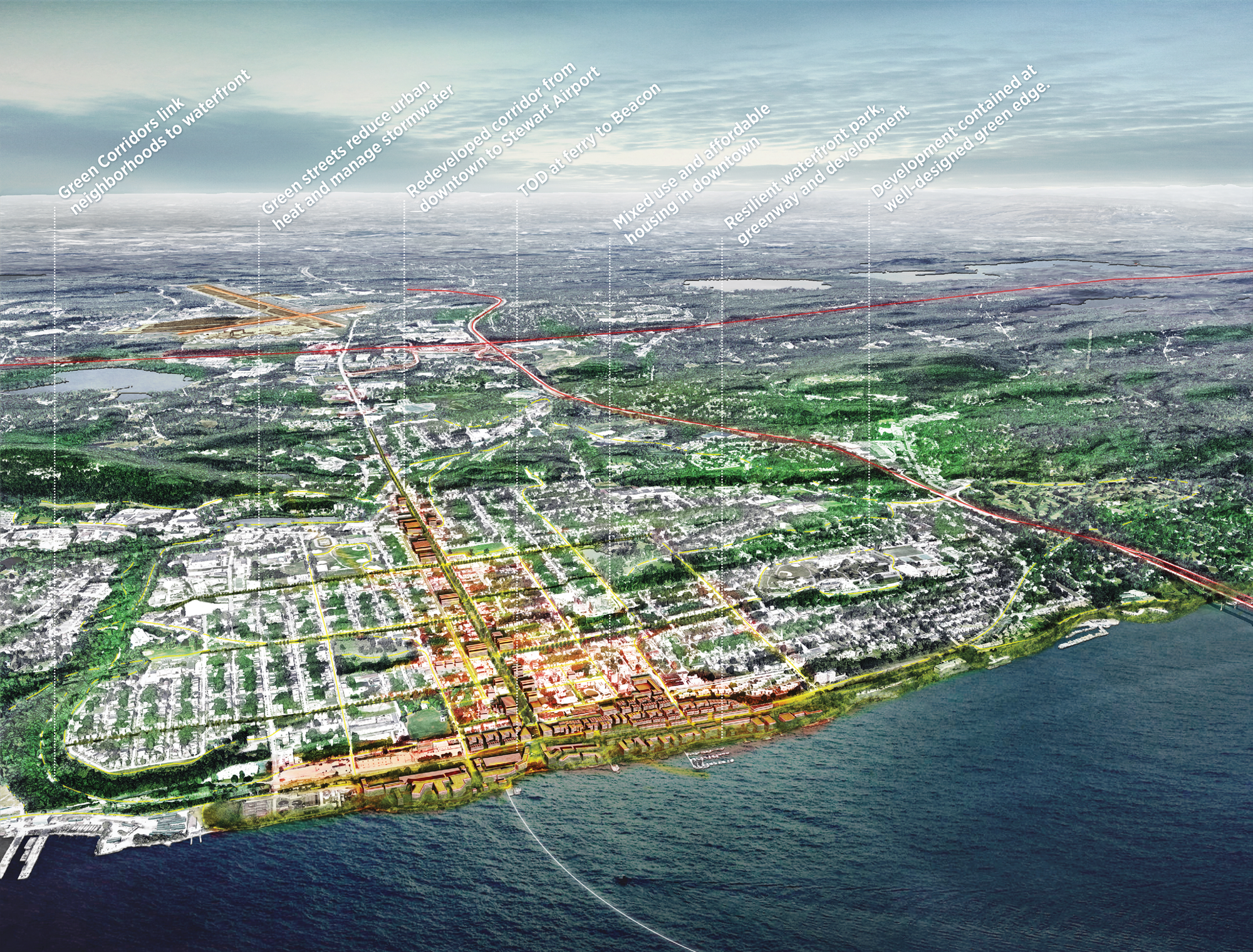 Like other former industrial cities that peaked in the mid-20th century, Newburgh experienced decline and then forged its own renewal in the 21st century. The city’s revitalization had benefits for the whole region—development in the city reduced sprawl, helped bring people out of poverty, and allowed greater access to economic opportunity.

Unable to rely on the strength of Manhattan’s central business district, the city built its own by improving the digital infrastructure—seeded with state and local government support—that allows newer, smaller businesses to flourish. Municipal partnerships with Mount Saint Mary College and Saint Luke’s Cornwall Hospital included collaboration on workforce development, a “buy local” strategy, and reciprocal capital and economic investments. Bus rapid transit has greatly eased congestion on Route 17 and interstate 84, while connecting Newburgh’s downtown with an expanded Stewart Airport and the Metro North rail station at Beacon.

Upgraded neighborhood housing stock, anti-displacement measures, strong rent regulations, and providing legal counsel to low-income residents who faced eviction allowed residents to stay in the city as the economy strengthened. The Newburgh Land Bank, formed in 2014, played a critical role in rehabilitating hundreds of formerly blighted properties and supporting infill mixed-use development of vacant lots. Houses were made available to low- and moderate-income first-time homebuyers, and many apartment buildings were turned into affordable cooperatives or community land trusts with permanently affordable units.

The city built contextual, mixed-income, mixed-use developments that include community-owned affordable housing, as well as artist and commercial spaces. Newburgh entered into intermunicipal-transfer-of-development-rights agreements, which played an essential role in bringing positive development to the city while stopping the sprawl that had been threatening to destroy the farming communities and natural areas of the Hudson Valley. The city planned inclusively, listening to its diverse communities and organizations in the planning process before making land-use decisions. And, many local organizations engaged in a collective impact strategy to ensure existing residents benefitted from changes in their community. As a result, Newburgh is still home to people from many races, ethnic groups, and income levels.

To improve the city’s access to nature, there is a network of open spaces connecting neighborhood parks to Snake Hill, Quassaick Creek, and a Hudson river waterfront greenway that also links to a mixed-use waterfront at the downtown to natural edges to the north and south. The former consolidated iron site was transformed from a city-owned superfund parcel into a great public park on the Hudson River.

Newburgh’s economic development has focused on reducing poverty and inequality by providing state support for a collaborative city-town-county strategy. This allowed for the sharing of property tax revenues to support worker cooperatives, urban markets that collaborate with surrounding agriculture, and local artists and cultural organizations, all connected with high-speed internet. In addition, revenue sharing also drastically improved the quality of area schools.

Newburgh also capitalized on a broader regional push toward compact urban living by playing to its greatest strengths: diversity and affordability, a beautiful historic urban fabric, proximity to freight and highway infrastructure, and its proximity to nature and open spaces. Newburgh even partnered with surrounding municipalities in Orange County to ensure development was concentrated in the city through transfer of development-right agreements that conserved land outside. These agreements facilitated much broader cooperation, from revenue sharing between school districts to agreements on cooperative businesses, including agricultural businesses.