Property tax policy and zoning and financing restrictions often make it difficult to build more homes where it makes sense—for instance, in walkable or potentially walkable neighborhoods near mass transit. Instead, locations with easy transit connections to job centers are used for part-time parking. Places that could become vibrant mixed-use districts that provide jobs and urban amenities are limited to residential uses, with any kind of shopping or other excursions requiring car trips. And in our region’s core, artificial restrictions limit both housing and commercial space in places where they are needed and the market could support them.

All levels of government need to be part of the solution. Municipal, state, and federal regulations need to encourage multifamily and mixed-use development in places with transit and other infrastructure to support it.

Allow for multifamily and mixed-used development in proximity to all train stations, especially on sites currently used for parking

Local zoning regulations often restrict multifamily development in places it would make the most sense—near mass transit, and where less parking would be needed for the new homes. By proactively zoning for multifamily, mixed-use development near rail stations, we can create the sort of walkable, transit-oriented communities that are in demand today and needed for the future. Throughout the region, an estimated 263,000 new homes could be built with well-designed, appropriately scaled housing on unbuilt land within a half mile of commuter rail stations. While this is primarily the responsibility of the region’s 782 municipalities, states should provide planning assistance to encourage municipalities to allow more multifamily and mixed-use development near stations.

Federal insurance and financing programs through the Department of Housing and Urban Development, the Federal Housing Administration, Fannie Mae, and Freddie Mac are used in the vast majority of new housing development. But restrictions on the proportion of commercial space and income allowed in these developments often don’t allow for the type of two- or three-story mixed-use development that is common to the region’s smaller downtowns—and needed in commercial strips and near transit. Federal regulations should be changed to allow for this type of mixed-use development.

New York State law currently does not allow residential floor area on any site in the state to exceed 12 times the lot area, despite new commercial buildings and residential development in converted New York City office buildings often being twice this density or more. This restriction keeps New York City from growing its housing stock in denser areas near transit and amenities. It also precludes the city from creating more affordable homes and economically integrated neighborhoods through the city’s Inclusionary Housing program, which requires low- and medium-income homes in new housing developments on upzoned parcels.

Storefront commercial and community usage brings jobs, amenities, and street vitality to a neighborhood. On many main thoroughfares, however, storefront commercial usage is prohibited, leading to dead streets, fewer shopping options for residents, and higher rents for commercial space overall. Storefronts should be allowed wherever the market will support it and sufficient street space exists, and where surrounding density can ensure a walkable community without adding to traffic or parking. Other structures that abut sidewalks on major thoroughfares, such as garages, should be allowed to convert to commercial usage as well.

Change tax policy for vacant land, with a phased-in rate based on potential valuation instead of current use

It can be more lucrative for landowners to warehouse vacant land, waiting for rising prices in hot neighborhoods to peak, while still paying very little in property taxes. This means residents must live next to eyesores instead of homes, shops, or community spaces. And it reduces the number of available sites to develop in rising markets, which in turn constricts housing supply and further drives up land prices. States should allow cities to innovate with phased-in revaluations of property taxes on vacant land to reflect their potential value if developed. This would encourage home construction and job creation, and help solve our housing crisis by turning civic liabilities into assets.

Municipalities closer to Manhattan are only somewhat more likely to allow multi-family housing near their train stations than communities farther out on the train lines. There is a tremendous untapped potential for new affordable multi-family housing in those places with quick access to the CBD. Source: RPA

From the time I moved here, I'd say, seven years ago, there's been a drastic change. The new restaurants, the new condos, the high-rises. It's much better, I feel, in Stamford.

Removing these restrictions would lead to hundreds of thousands of new homes over the next two decades in walkable neighborhoods with access to jobs, schools, stores, and other necessities. This would not only bring down the cost of housing, but would also reduce the cost of transportation by letting more people walk or take the train or bus to their destinations. Expanding housing choices and creating new commercial space would help accommodate a growing and changing population, and attract the workforce needed for a vibrant economy. Since this construction will either take place in, or lead to, walkable neighborhoods, it will reduce automobile usage and improve the environment and health of millions of people in the region. 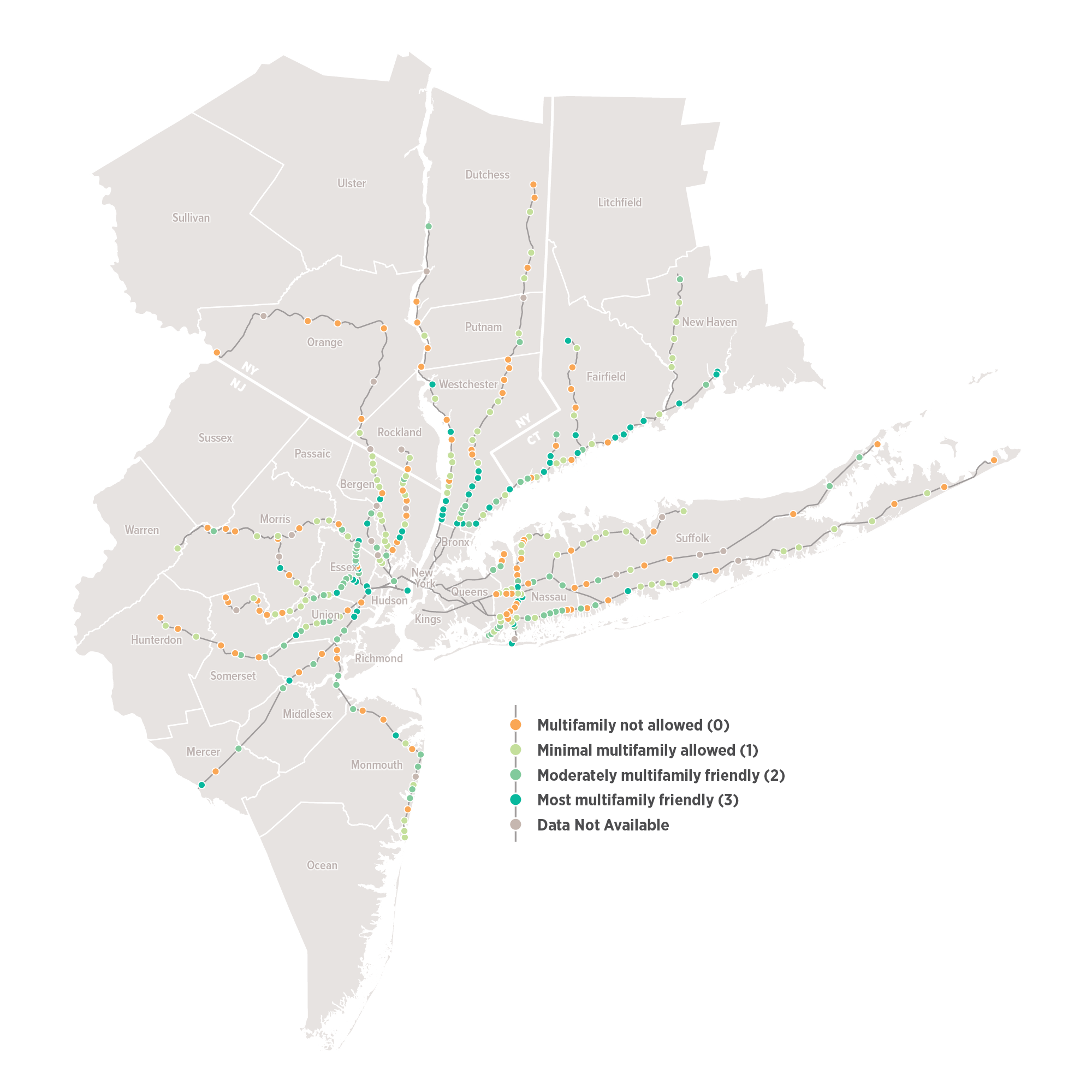 Municipalities closer to Manhattan are only somewhat more likely to allow multi-family housing near their train stations than communities farther out on the train lines.  There is a tremendous untapped potential for new affordable multi-family housing in those places with quick access to the CBD. Source: RPA

Implementing these recommendations would produce significantly more revenue than costs for the cities, towns, and villages that enact them. By allowing and encouraging development in places where the market can support it, development costs would mainly be incurred by the private sector. This would lead to increased public revenue through property taxes, and to a lesser extent, local sales taxes through added economic activity and commercial space. Job growth through more construction and commercial activity would also mean increased wages, which adds to revenue and economic activity.